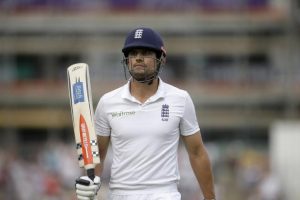 After Alastair Cook, it was Bell`s turn to roar back to form with a blazing knock while debutant Jos Buttler upped the ante with a dazzling 83-ball-85 before England skipper decided to declare. At stumps, India were 25 for one in 14 overs as their first target will be to reach the magic figure of 370 thereby saving the follow-on. Murali Vijay (11 batting) and Cheteshwar Pujara (4 batting) were at the crease.

Shikhar Dhawan`s (6) English Summer turned from bad to worse as he edged one from James Anderson to Cook at slip. The day belonged to senior pro Bell, who hit his 21st Test century and also crossed the 7000 run mark en route his century. He completed the landmark with a majestic straight six off Ravindra Jadeja to complete the landmark.

His partnership with another centurion Gary Ballance (156) yielded 142 runs before the left-hander was adjudged caught behind off Rohit Sharma, which later looked to be a dubious decision. Ballance, struck 24 boundaries in 288 balls in an innings, that spanned over six hours and 15 minutes. Joe Root and Moeen Ali were dismissed cheaply in the post lunch session by Bhuvneshwar Kumar, who was by far the most impressive Indian bowler with figures of 3/101 from 37 overs.

However it was young Buttler replacing Prior, who stole the show in the last session with some breathtaking hitting as he struck nine fours and three sixes. Buttler was lucky to when there was no conclusive evidence of Ajinkya Rahane taking a clean catch in the slips off Bhuvneshwar`s bowling. Two of the three sixes hit by Buttler were flat-batted ones hit in an over from Pankaj Singh (0/146 in 37 overs).

Once Buttler was bowled by Jadeja, Cook called back the batsmen. Jadeja sent down a marathon 45.4 overs taking two for 153 in the process. It was surprising to see that the Indian skipper not giving a lengthy spell to any of his three medium-pacers after lunch, instead opting to give them one over at a time. Mohammad Shami (1/123), Pankaj and Bhuvneshwar were rotated in this manner throughout the first hour of play.

This bowling merry-go-round resulted in the wicket of Joe Root (3), out in the 128th off Kumar, and perhaps put a check on the scoring as well with only 30 runs coming off the 13 overs bowled. Even after the drinks break, this ploy from Dhoni continued but he also deployed Ravindra Jadeja (1-101) from the other end.

But Bell who had enough of this negative tactic and he charged down the wicket in the 135th over of the innings and deposited Jadeja straight down the ground for his second six, bringing up his hundred off 179 balls, with 12 fours included. The 400-run mark had come up in the same over as Jadeja was taken for 21 runs. Bhuvneshwar then got his second wicket with Moeen Ali (12 runs, 28 balls, 1 four) again falling to a short ball. And he should have had his third as well but Buttler, on nought, was adjudged not out by the third umpire when Ajinkya Rahane took a low catch at second slip.

He survived to add 32 runs for the sixth wicket with Bell and took the score past the 450-run mark in the 144th over, the quickest fifty yet of the innings, coming in only 55 deliveries. Earlier, Gary Ballance and Bell had put on 142 runs for the third wicket as they ground the Indian bowling until lunch, plundering 111 runs in 29 overs bowled in the first session of play. This was more runs scored in any single session of the match so far and showed how the English batsmen dominated proceedings in the morning.

Bell played more aggressive cricket, and at one stage the session scoring-rate almost touched five runs per over, with 47 runs coming off 10 overs bowled in that interim of play. Bell reached his half-century off 99 balls then, with 7 fours and 1 six, in the 107th over. An over later he brought up the 100-run partnership for the third wicket. India then resorted to a 7-2 field for Jadeja, sometimes on the leg-side even, but the batsmen were good enough to get boundaries through them.

Ballance in particular was in fine form, bringing up his 150 off 278 balls, with 23 fours, in the 115th over. An over later, England breached the 350-run mark, and looked good for a tall score in the first innings. Rohit Sharma (1-26) was then brought on as a last throw of the dice before lunch, and to England`s dismay, he struck two overs before the break. A sharp delivery bounced quite a bit and came off his thigh pad which was well taken by Dhoni, and adjudged out by umpire Rod Tucker giving Rohit, his maiden Test wicket.

Ballance was extremely unlucky to be given out at this juncture after scoring 156 runs (288 balls, 24 fours), with India getting an opening against the run of play.