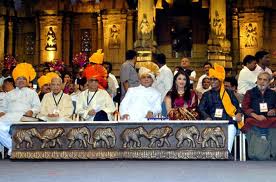 The queen of Indian cinema Aishwarya Rai-Bachchan was the cynosure of all eyes yesterday at the inaugural programme of the World Kannada Sammelan held in Belgaum. Aishwarya arrived in a special aircraft at Sambra airport on Friday evening to attend the event. Earlier in the day Shiv Sena had asked her not to participate in the meet as it was against the Marathis.

Addressing the mammoth crowd of 70000 plus Aishwarya surprisingly began her speech in Kannada, Ido samastha Kannadigarige nanna vandane,” she said, eliciting loud applause. “Ellarigu preethiya namaskaragalu… nannannu abhimana-dinda karesi gouravisiddakke nanu abhari,” she said and then changed over to Hindi. Later keeping aside her prepared speech, she spoke her heart out, expressing gratitude for the love and honour bestowed on her by the Kannadigas.

Thanking the chief minister and other organisers for inviting her, she said, “I am happy to be here. I salute the people of Karnataka for giving me this opportunity to come here.”