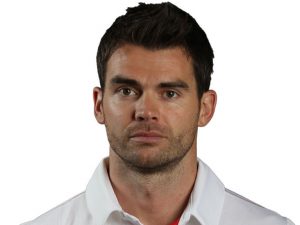 Anderson will head to his Old Trafford home ground for the fourth Test against India hoping to close in on Ian Botham`s record for the most Test wickets by an England bowler.

James Anderson was in danger of being banned from the final two Tests of the five-match series after being charged by India under the International Cricket Council`s code of conduct.

But the Lancashire paceman was cleared by an ICC disciplinary hearing on Friday.

India charged Anderson and England counter-charged India all-rounder Ravindra Jadeja under the ICC code regarding an incident that took place during the lunch break on the second day of the drawn first Test at Trent Bridge on July 10.

James Anderson and Ravindra Jadeja, batting at the time, were seen exchanging words as the players left the field.

It was then alleged that this had escalated into a more serious disagreement when the players reached the privacy of the pavilion.

However, following a six-hour disciplinary hearing on Friday, Anderson was cleared by ICC code of conduct commissioner Gordon Lewis, while Jadeja had his previously imposed 50 percent match fee fine rescinded.

Anderson had been facing a ban of up to four Tests but Lewis`s decision means he is free to play in the rest of the five-match India series, all square at 1-1 after England`s dominant 266-run win at Southampton on Thursday.

England will be hugely relieved that fast-medium bowler Anderson, their series-leading wicket-taker, and named man-of-the-match for his seven for 77 at the Ageas Bowl in the team`s first Test win for nearly a year, has been cleared.

Now the 32-year-old fast-medium bowler could become England`s leading all-time Test wicket-taker before the end of the season.

He currently has 371 Test wickets, 12 shy of legendary all-rounder Botham`s tally of 383.The fourth Test at Old Trafford starts this coming Thursday, August 7, with the series finale at The Oval later this month.

“I hope we`ll see Jimmy at Old Trafford in his home Test match.”

Anderson added: “It (the ICC charge) has been in the background and we have done outstandingly well as a team to put it out of our minds.

“Once I`m out on the field the one thing on my mind is to take wickets, and I did that.”

Meanwhile England coach Peter Moores, also speaking before the outcome of the hearing, said: “I`m not going to start judging Jimmy Anderson on everything he does and doesn`t do.

“What I will say is that at the moment we celebrate the fact that he`s bowling at his best…The spell he bowled on the last morning was a real masterclass of swing bowling.”

The Anderson-Jadeja row comes after a recent revamp of the ICC where the `Big Three` nations of India, England and Australia took charge of the global governing body.

India cannot appeal against the Anderson verdict, with only England — which clearly has no reason to do so — and the ICC itself able to challenge Lewis`s decision.

However, India`s N. Srinivasan is now also the ICC chairman, despite being suspended from his equivalent Indian board post by India`s Supreme Court over a corruption inquiry involving his son-in-law.