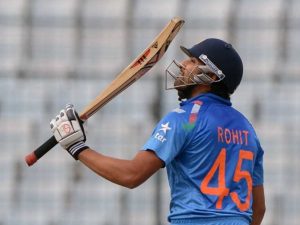 Sanjay Bangar, India’s assistant coach, said that Rohit Sharma’s 142 against the Sri Lankans in a warm-up match on Thursday showed that the Mumbai batsman had fully recovered from the finger injury that had sidelined him for more than two months. Bangar, who was in charge of India A for the warm-up game at Brabourne Stadium, also praised Manish Pandey, who scored an unbeaten 135 off 113 balls, in India A’s 88-run win over the visitors.

He is a quality player. He didn’t get a game because of the injury. His match fitness had to be assessed and that was the reason the selectors had dropped him (from the first three ODIs against Lanka). He gave a fantastic account of himself.

“He has been practising really hard over the last 10 days at BKC. And he showed the total recovery from that injury while batting and he showed no discomfort at all. He fielded throughout the 50 overs and these are good signs for the Indian team,” said Bangar after India A swamped the Lankans by 88 runs at the Brabourne Stadium.

Sharma, who injured his right middle finger in the first ODI against England during India’s visit earlier this year, hit one six and 18 fours after opening the innings with Unmukt Chand (54) and was run out by a direct hit at the striker’s end when going for a second run.

India ‘A’ ran up a huge total 382 for 6 and then restricted the visitors, who will now play a five-ODI series against India from November 2, to 294 for 9.

Bangar also praised Manish Pandey, saying the Karnataka batsman’s punishing knock of 135 not out, off 113 balls, will give him a lot of confidence.

He also praised the India ‘A’ bowlers, saying they stuck to plans.

“There were a lot of positives, especially the way we got the partnerships for the opening, second and third wicket. The running between the wickets; the intent was there. We were playing eleven and they were exercising all their options. That was an added challenge and the way bowlers responded was terrific. All of them bowled to a plan and executed well.”