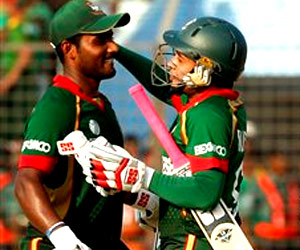 CHITTAGONG, Bangladesh: Bangladesh cruised closer to World Cup quarterfinal qualification on Monday with a six-wicket victory over the Netherlands.

Slow left armer Abdur Razzak took three wickets and opener Imrul Kayes stroked 73 not out to give Bangladesh its second victory in Chittagong in four days, keeping alive its chances of reaching the last eight.

The Netherlands was dismissed for 160 while Bangladesh cruised to 166-4 from 41.2 overs, winning the game with a six.

Bangladesh will qualify if West Indies beat England on Thursday in Chennai. Otherwise, the entire population of 150 million will be cheering the team on when it plays South Africa in Dhaka on Saturday.

“We will now play against South Africa taking enough confidence,” he told reporters in a post-match press conference.

“It’s now pretty clear if we win the next game, we will move to the next round,” he said.

The Bangladesh team opened the World Cup with a loss to co-host India in Dhaka, then beat Ireland by 27 runs. Any encouragement gained from that was lost in a nine-wicket defeat to the West Indies, when Bangladesh was bowled out for just 58 runs.

On Monday, the innocuous Dutch bowling attack presented few challenges on a flat Chittagong wicket and Bangladesh passed the total in the 42nd over.

Imrul shared a 92-run second wicket partnership with Zunaed Siddique. His unbeaten 73 came off 113 balls that included six boundaries, and he was declared man-of-the-match.

Tamim Iqbal was bowled for a duck in the fourth ball of the innings as Mudassar Bukhari struck.

Zunaed scored 35 off 52 balls before he was caught by Pieter Seelaar off Peter Borren in the 21st over.

Coming in at four, Shahriar Nafees added 37 runs from 60 balls before he was bowled by Tom Cooper.

For Netherlands, only Ryan ten Doeschate, with 53 not out, managed a decent innings as the Dutch fell victim to four runouts, a stumping and slow spin.

Borren said four run-outs were heavy to bear and the wicket had been difficult.

He said they failed to make a bigger score as the wicket “was pretty slow, we are not used to these kinds of conditions, and we (usually) like to play shots with the ball coming on.”

Bangladesh made the first breakthrough in the 10th over after captain Shakib al-Hasan trapped Wesley Barresi lbw for 10.

No. 3 batsman Mudassar Bukhari (6) was the second man to go, caught by Mushfiqur Rahim off Abdur Razzak. He also trapped Tom de Grooth lbw for 4 and took Atse Buurman for a duck, caught by Imrul Kayes.

But ten Doeschate, the best Dutch batsman, came in at number five and was left stranded when Bangladesh tore through the tail. His 50 took 65 balls and included two fours and a six.

Abdur Razzak took 3-29 but Shafiul Islam was the pick of Bangladesh’s bowlers even though he didn’t take a wicket. He finished with figures of 0-15 from 9.2 overs, starving the Dutch of run-making chances.

Bangladesh made two changes from the team that had a two-wicket win over England, bringing in Sohrawardy Shuvo and Shahriar Nafees in place of Naeem Islam and Raqibul Hassan.