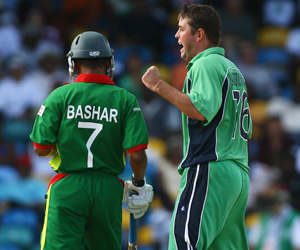 MIRPUR: Bangladesh won the toss and opted to bat against Ireland in a World Cup Group B match at the Shere Bangla National Stadium here Friday.

Experienced Batsman Mohammad Ashraful made a return to the playing eleven for the home team.

Smarting from their opening match defeat against India, Bangladesh will look to bring their campaign back on track, avenging their previous losses to Ireland when they lock horns against them in Group B match of the cricket World Cup here tomorrow.

Four years ago, Ireland had defeated Bangladesh by 74 runs in the Super Eights stage of the 2007 World Cup in West Indies, before beating the Asian team in the Twenty20 World Cup in England in 2009.

Bangladesh will be fully aware that another slip-up will make it difficult for them to reach the knock-out stage as they have to beat Ireland and the Netherlands, and one of the sides from England, South Africa and the West Indies.

Ireland, on the other hand, have made massive strides in international cricket since their giant-killing act in the previous World Cup, where they knocked out Pakistan in the first round, before beating Bangladesh in the super eight.

William Porterfield’s team has nine players who were part of the campaign in the Caribbeans, besides the presence of Ed Joyce, who played 17 ODIs for England before opting to turn out for Ireland.

“The way we are playing right now, we’ll be confident going into the match on Friday. The conditions here might be different from what we are used to, but not necessarily a difficult one,” Porterfield said.

“We played pretty well in the last couple of warm-up games, picked up the momentum, and we will be feeling pretty confident,” he added.