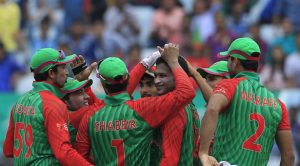 After defeating Pakistan and India in their previous series, South Africa were supposed to be the biggest test for Bangladesh, and the “Tigers” have passed it with flying colours. Bangladesh defeated South Africa in the third and final ODI of the series at the Zahur Ahmed Chowdhury Stadium in Chittagong on Wednesday to script a historic 2-1 win.

Soumya Sarkar, fresh from his unbeaten 88 in the series equalling second match, scored 90 and Tamim added an unbeaten 61 as Bangladesh raced to 170-1 after the home bowlers had restricted the mighty Proteas to 168-9 in a rain-hit game.

The first series win over the world cricket heavyweights continues minnows Bangladesh`s coming-of-age party, capping another historic success for Mashrafe Mortaza`s men after their maiden appearance in the World Cup quarter-final and successive series wins over India and Pakistan earlier this year.

Soumya led the batting charge with his stroke-filled 75-ball innings, which included 13 fours and a six, with local boy Tamim playing the role of an anchor in their 154-run opening stand.

The match was reduced to 40-over-a-side as rain at the Zahur Ahmed Chowdhury Stadium halted play midway through the South African innings for nearly three hours.

Bangladesh were given a target of 170 runs according the Duckworth/Lewis Method, and they achieved it comfortably with 83 balls to spare.

One-down Litton Das hit the winning boundary after Soumya was dismissed when the victory was just a formality. Hashim Amla took the catch at short-cover off legspinner Imran Tahir.

South Africa, opting to bat first, were in dire straits with 4-78 in 23 overs when the rain came.

JP Duminy topscored 51 off 70 balls and put 63 runs with David Miller (44) for the fifth wicket to help the visitors recover before he became the last man dismissed.

Shakib, who finished with 3-33, completed his milestone when he claimed the wickets of Faf du Plessis and captain Amla after Mustafizur Rahman gave the hosts their first breakthrough.

When Shakib forced Amla to edge a catch to wicketkeeper Mushfiqur Rahim, he became the second Bangladeshi to take 200 ODI wickets after another left-arm spinner, Abdur Razzak who took 207 wickets.

It also secured Shakib a place in the elite club of all-rounders who have taken 200 wickets and scored 4,000 runs in ODIs.

He was soon joined by Mortaza (1-29) in the 200-wicket milestone after the Bangladesh captain got rid of David Miller, who gave a catch to Sabbir Rahman at backward point.

The two teams will play a two-Test series after the ODIs with the first Test starting in Chittagong on July 21.