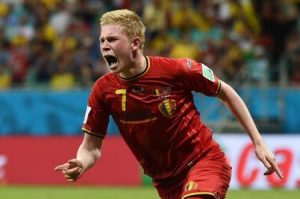 American keeper Tim Howard had made a string of fine saves to keep Marc Wilmots` men at bay during the 90 minutes in Salvador.

However, he was finally beaten by De Bruyne`s angled drive after good work from substitute Lukaku and De Bruyne then returned the favour to allow Lukaku to slam past his Everton teammate Howard.

The States got back in the game two minutes into the second-half of extra time when substitute Julian Green volleyed home and only a fine save from Thibaut Courtois prevented Clint Dempsey from taking the game to penalties moments later.

But Belgium held on to set up a rematch of their 1986 semi-final defeat to Argentina in Brasilia on Saturday.

Lille`s 19-year-old striker Divock Origi had been brought into the side at Lukaku`s expense after impressing as a substitute in all three of Belgium`s Group H wins and he was denied within the opening minute by Howard`s outstretched leg after racing onto Kevin de Bruyne`s through ball.

Belgium`s pace on the counter-attack was a constant threat throughout the match and they should have gone in front when Jan Vertonghen fed De Bruyne, but having cut inside to open up the goal he slotted wide at the near post.

Jurgen Klinsmann`s men were then dealt a blow as one of their standout performers in the group stages, Fabian Johnson, limped off with a hamstring injury to be replaced by DeAndre Yedlin.

However, Yedlin nearly made an instant impact as he burst forward on the right and pulled the ball back for the unmarked Graham Zusi who shanked his shot horribly off target.

Belgium started strongly again in the second-half with the ever dangerous Vertonghen producing another fine cross from the left that both De Bruyne and Origi failed to turn home.

Origi was desperately unlucky moments later as his header from Toby Alderweireld`s cross came back off the crossbar.

Vertonghen then saw a low effort saved by Howard and volleyed over before Axel Witsel fired a shot inches wide as the wave of Belgian attacks continued.

Origi was then presented with another great chance after a fine run by substitute Kevin Mirallas, but again his low effort was beaten away Howard.

The Everton keeper`s best stop was to come though as he again used his legs to prevent club teammate Mirallas from slotting home 14 minutes from time.

Howard continued his one man resistance by parrying another low effort from Eden Hazard and then turning over a pildedriver from Origi.

Unbelievably the States then passed up a huge chance to win the game in stoppage time when Chris Wondolowski blazed over from Jermain Jones` knockdown.

Lukaku was introduced for Origi at the beginning of extra-time and made an immediate impact as he teed up De Bruyne to finally slot past the outstretched leg of Howard.

The 35-year-old continued to keep his side in the game with three more fine stops, but was eventually beaten for a second time when Lukaku thumped home De Bruyne`s through ball in stoppage time at the end of the first-half of extra time.

America were given a lifeline two minutes into the second period, though, as Green turned home Michael Bradley`s chipped pass.

And they twice came desperately close to taking the game to penalties as Jones fired inches wide before Courtois smothered from Dempsey to book Belgium`s place in the last eight.