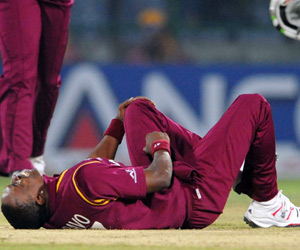 Bravo slipped on his follow through when he went across the pitch trying to stop the ball after South African captain Graeme Smith punched it towards mid on in the 14th over.

He fell clutching his left knee and seemed to have twisted his knee while landing clumsily after bowling just 2.1 overs.

Bravo was taken off from the field and Kieron Pollard completed the over.

West Indies media manager Philip Spooner said Bravo will undergo a scan tomorrow and the seriousness of his injury will be known only after that.

“He will take no further part in tonight’s game and tomorrow we will take him for a scan. The nature and seriousness of his injury will be known only after that,” Spooner said.