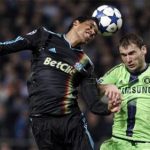 Marseille: Brazilian striker Brandao piled on the misery for out-of-form Chelsea with the only goal in Olympique Marseille’s 1-0 victory in Champions League Group F.

Brandao tapped the ball past keeper Petr Cech from close range with nine minutes to go after a left-wing cross from Taye Taiwo was deflected into his path.

Chelsea, who have picked up just five points from the last 18 in the Premier League, produced another sluggish performance and Didier Drogba was taken off on the hour after the Ivory Coast forward struggled on his return to his former club.

Defeat ended Chelsea’s 100 percent record in the group as they finished with 15 points from six games, three ahead of Marseille. Both teams had already qualified for the knockout stages.

“We are in a difficult situation, we are losing confidence … and we are not very lucky,” Chelsea manager Carlo Ancelotti told reporters. “Tonight was our opportunity to restart a positive spiral.”

“This weekend we are playing Tottenham in the Premier League, a top team in good form. I am more worried for my team (than for my future).”

Drogba received a standing ovation at the Stade Velodrome but gave another anonymous display as his side were outplayed in the first half.

Confusion then reigned when Chelsea were awarded a corner rather than a penalty after Florent Malouda was brought down by Souleymane Diawara.

Russian referee Vladislav Bezborodov seemed to point to the spot before changing his mind and awarding a corner, ignoring the pleas of the visitors.

Chelsea’s Salomon Kalou also appeared to be brought down in the box while at the other end Gabriel Heinze headed the ball past Cech only for the goal to be ruled out for offside.