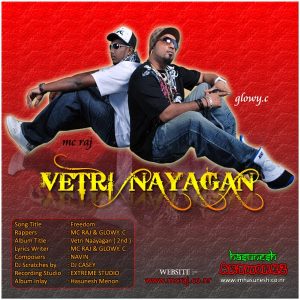 A trio is here to pump some fresh air in the Tamil music album arena. M C Raj, Glowy C and Dinesh G have come out with ‘Vetri Nayagan’, an album with 10 tracks with a tag ‘Ride ur Muzic’.

The album is produced by Norway Kodi and Dinesh G. Being and seeing themselves as friends tuned to rock, they have teamed up to mark their presence felt in music platform.

“Out of the total 10, three are romantic melody and the rest is Tamil Hip-Pop. The album also has two music videos- ‘Drohi’ and ‘Freedom’. The song ‘Drohi’ is based on gangster gala, for this reason the crew shot the entire music video in Binny mills with Royal Enfield Riders Club lined up with a hero and villain saga.

The second song is based on freedom for music; where the concept revolves around the two main rappers, who will be slaved to rope by a don who will set them free them only if their song sounds enthralling,” says a press release.

The release added: “Coming to the boys, the base for the album, Mc Raj is a Tamil rapper scene in Malaysia. The entire creative set-up was handled by Dinesh G, who is a director-cum-actor by profession.”

Viewers of IndiaGlitz can watch the music video on 18th March Exclusively.