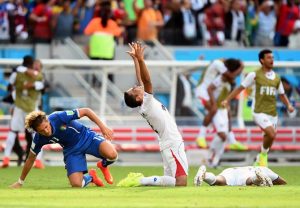 Skipper and PSV Eindhoven striker Bryan Ruiz headed home the winner in the 44th minute as Costa Rica became the first team from group D to qualify for the knockout round.

The win also meant curtains for England in the group which was termed as the ‘Group of Death’ also featuring Croatia. While Italy will need a draw to make it to the last 16, Uruguay can’t settle for anything less than a victory.