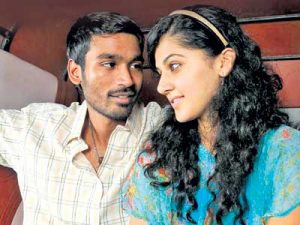 Tapsee is the heroine of Dhanush in ‘Aadukalam’. Sources say that when the film was in its final schedule of shooting in Madurai, Tapsee was finding it very uncomfortable at the sets and was finding difficult to communicate with people.

Seeing the discomfort of heroine, as usual the hero came in for rescue. After understanding what Tapsee’s problem is, Dhanush gave a secret gift to the heroine after which she was able to feel at ease.

She even claims that now she doesn’t need any one to make her thoughts public because of the gift by Dhanush. So what is that Dhanush gifted that changed the life of Tapsee? It is nothing but a book “How to learn Tamil through English in 30 days”. Not knowing the language was her problem.

Now she feels good in Tamil and her career in Tamil is also growing as her confidence. After ‘Aadukalam’ with Dhanush, Tapsee is eyeing on her next big project ‘Vandhan Ventran’ with Jeeva.