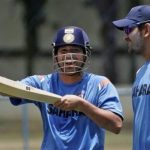 Sehwag was supposed to leave with the first batch of the touring party members on December 6 but changed his plans as he was indisposed.

The remaining members of the Test squad, Gautam Gambhir, Zaheer Khan and Murali Vijay who are busy playing the ODIs against New Zealand that conclude on December 10, would leave on December 12.

The three-Test series against South Africa commences on December 16 at Centurion.