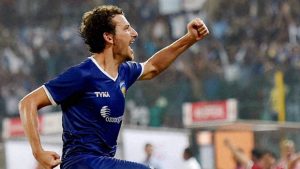 Coming back after an injury layoff, Atletico de Kolkata skipper Luis Garcia and the tournament’s leading scorer Elano Blumer, of Chennaiyin FC, scored a goal each as the two sides shared points in a top-of-the-table clash in the Indian Super League here on Tuesday.

In an intense physical game, things didn’t go as planned for the home team initially when goalkeeper Shilton Paul was sent off for a challenge on Mohammed Rafi and Luis Garcia calmly slotted home from the spot. Then, ATK were reduced to 10 when Jofre Gonzalez received a second yellow card for diving.The visitors then conceded a penalty in the final minute to give Elano the chance to bring parity. The Brazilian made no mistake.

After missing the last two games, Garcia seemed to be taking Kolkata to another victory before Elano, leading the scoring chart with six goals, dashed the visitors’ hopes of pulling off a win on the road.

Garcia, the Spanish defensive midfielder, made a difference in the middle and was one of the best players of the day on either side.

ATK maintained their table-topper status scoring against the run of play. But it was Elano, who bagged the Moment of the Match award with his strike at the death.

The hosts were awarded the penalty after John Mendonza was brought down by ATk’s substitute Kingshuk Debnath.

Elano, who couldn’t do anything special till that point, succeeded in beating the Kolkata goalkeeper Apoula Edel with a low shot.

Chennaiyin goalkeeper Shilton Paul was red carded for raising his left leg as he fell on the ground when Mohammed Rafi was about to take a shot at the empty goal.

Chennaiyin had nine shots at the goal as against just two by the visitors. While he may have consolidated his position at the top of scoring chart, Elano was not his usual self for most part of the match.

After Paul was given the marching order, Gennaro Bracigiliano took on the responsibility at the post, and he failed to read Garcia.

The standout teams so far in the inaugural edition of the football league, Atletico de Kolkata and Chennaiyin FC occupy the top two spots in the points table.