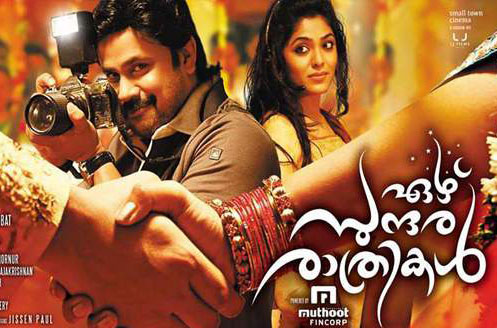 Ezhu Sundara Rathrikal is enjoyable! There is an art in giving a title to a movie and Lal Jose and his team may have been inspired by one of the most endearing melodies in Malayalam Ezhu Sundara Rathrikal when they decided to give this lyrical title to their new movie. Indeed just as the song this typical Lal Jose offering is a peek into the life of a bridegroom, seven days prior to his marriage. The concept is delectable and the variegated experiences and the deluge of expectations about married life that an expectant bridegroom harbours, did have the potential to offer a novel experience for the discerning viewer to dip his or her beak into. ‘Ezhu Sundara Rathrikal’ has its heart in the right place and has some really hilarious and genuine moments. Aby Mathew(Dileep) is an ad film maker who is in search of a bride. As anyone who is married would attest to, finding a bride who ticks all the boxes of expectations is a herculean task. Fortunately for Aby he comes across someone who is in the same boat as him. An upcoming model that he introduces Ann(Parvathy Nambiar) walks into his life and steals his heart. His excitement soars through the roof and in no time he throws a bachelor party to his friends seven days prior to the wedding. Things look wonderfully poised for Aby but certain events that take place after the party lands his life in a rut. He comes to know that his ex- lover Sini is living nearby from one of hisfriends Abid(Harisree Asokan). A flashback ensues and we see the earlier days when the couple were deeply in love with each other. Due to some particular reasons they part ways and both of them move ahead forgetting the episode. The remnants of old emotion spring up in the mind of Aby fleetingly, but once again his practical mind takes over. But he yearns to meet her to invite her for his marriage.She is married to a boxer named Tyson Alex (Murali Gopi) and leads a peculiar married life. What transpires in their second meeting and whether Aby will surmount hurdles that spring up in his quest to consummate his marriage is what the film all about. The movie is replete with some hilarious moments especially in the first half. It is a relief to see some genuinely funny moments from Dileep without the customary veering towards low brow and below the belt antics.The latter half when the meaty part of the plot is laid bare,things become a bit sluggish. The proceedings assume a serious air as issues of marital harmony, discords and fidelity are dealt with. The big prices that we pay for minor errors of judgment and life’s habit of surprising you at the most inopportune moment , Ezhu Sundara Rathrikal deals with it all in a multilayered premise. But things get into a maze of sorts after a point,as a few twists and turns rear their head to evoke a bit of shock and awe in the audience. It doesnt entirely bear fruit but Lal Jose’s ability to create something out of nothing saves the movie from being derailed. The end sequences bear the stamp of a seasoned film maker and helps the movie to iron out some of the creases which looked glaring. James Albert has not managed to produce a very good script since his maiden venture Classmates . Here also he just about acquits himself and excellence is sorely missing. Dileep is in the form of his life as far as box office credentials are concerned, but it is a welcome change for him in this movie to enact a role that has some substance. He is indeed the life blood of the movie and his rib tickling comedy sustains the movie.Murali Gopy continues to amaze with another stellar act as the boxer character with a different get up. Reema Kallingal is apt and debutante Parvathy is reasonable. Vijayaraghavan,Harisree Asokhan, Suraj Venjarumoodu, Sekhar Menon, Praveena etc are in their elements and do make their presence felt. Pradeesh Varma’s visuals struggle at times to live upto Lal Jose’s fertile imagination but still emerges unscathed. Music which is the hallmark of all Lal Jose movies is a slight letdown here with Prashanth Pillai failing to recreate Amen magic. The ability of Lal Jose to bring in the crowds is well known and in this festival season the popular star Dileep may very well be able to continue his winning streak. ‘Ezhu Sundara Rathrikal’ flirts with beauty on many occasions but finally ends up a tad short of being very good.