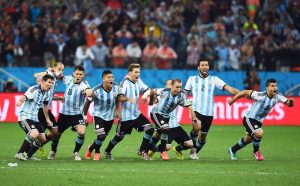 Sao Paulo: Goalkeeper Sergio Romero pulled off two stunning saves as Argentina edged out the Netherlands 4-2 in the penalty shootout in a grinding semifinal match to set up a World Cup summit clash against Germany here Wednesday.

The second semifinal between the two heavyweight teams ended scoreless in the regulation 90 minutes and 30 minutes of extra time and its result had to be decided via penalty shootout.

Captain Lionel Messi, Ezequiel Garay, Sergio Aguero and Maxi Rodriguez scored for Argentina while only Arjen Robben and Dirk Kuyt could found the target for the Netherlands.

Romero turned out to be the hero for Argentina as he blocked shots from Ron Vlaar and Wesley Sneijder to take his side to the fifth World Cup final.

This will be Argentina`s first World Cup final entry in 24 years after 1990 when they lost to Germany in the final under Diego Maradona.

In stark contrast to the goals galore in Germany`s 7-1 humiliation of Brazil in the first semifinal yesterday, today`s match was more of a battle of attrition with very few goal-scoring chances with both sides trying to break down their opponents gradually.

The clash between the two heavyweights was though not without some tense and gripping spells with some fine build-ups but none of the two sides either blinked or committed mistakes to give the other team a chance.

The Dutch were able to keep Argentine captain Messi quiet for most part of the match with Ron Vlaar doing a great job by denying the four-time World Player of the Year free space, stopping him with fine tackles on a couple of occasions.

Messi`s opposite number in the Dutch team, Robin van Persie, who made it to the starting line-up after recovering from a stomach problem just in time for the match, had a forgettable outing though he played the full 90 minutes before being substituted six minutes into the extra time.

Rodrigo Palacio had a glorious chance to score for Argentina five minutes before the end of extra time but he headed into the hands of Dutch goalie Jasper Cillessen who was at his mercy.

The first half was a cagey and tense affair with both sides unable to create clear chances, the closest either team came to breaking the deadlock was Messi`s free kick in the 20th minute that Cillessen dived to his right to comfortably save.

Argentina came close to scoring in the 75th minute when an Enzo Perez delicious through ball was toe-poked towards the goal by Gonzalo Higuain only to hit the side nettings.

The Netherlands pressed hard and laid seize of Argentina citadel towards the close of regulation time and Arjen Robben was sent clean through inside Argentine penalty area by Wesley Sneijder in the 90th minute but Javier Mascherano made a remarkable recovery to deflect the Dutch winger`s shot.

Just before kick-off, a moment of silence was observed at Arena de Sao Paulo to pay homage to Argentine-born Real Madrid legend Alfredo de Stefano who passed away yesterday at the age of 88. The Argentine players wore armband in the match in honour of de Stefano, one of the greatest footballers in history.