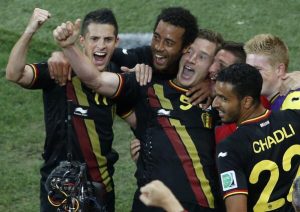 The win made it a maximum nine points for the Belgians, who meet the United States in the last 16 of the Brazil World Cup in Salvador on Tuesday.

Belgium coach Marc Wilmots made seven changes from the team that beat Russia, with captain Vincent Kompany and fellow defender Thomas Vermaelen dropping out due to injuries and playmaker Eden Hazard starting on the bench.

“This is a Cup played in a very hot country, so you have to anticipate,” he said, when asked to explain his new-look team. “I saved, I spared those I thought I had to spare. Now everybody is at the same level.”

For Korea, the tears in the eyes of players and fans at the final whistle said it all. They were out of the World Cup after gaining a single point and finishing bottom of Group H.

The defeat rounded off a miserable tournament for the four Asian sides. Between them, Australia, Japan, Korea and Iran failed to muster a single victory, and all finished bottom of their groups.

“I think all the Asian teams here at the World Cup did their best, but I guess the wall is very hard for us to get over,” said a contrite Korean coach, Hong Myung-bo.

“The players did their best, but it was my shortcomings as a coach that caused this result.”

Belgium had already qualified for the next round, having beaten Algeria and Russia in their first two games, and a draw was enough to claim first place and avoid Germany in the next round.

When Defour was given a straight red card for a needless, studs-up challenge on Kim Shin-wook in the 45th minute, the game opened up for the Koreans.

They had plenty of possession and a series of good chances, but were caught on the break when Belgium’s excellent substitute Divock Origi took a chance from distance.

Keeper Kim Seung-gyu lamely palmed the ball into the path of the onrushing Vertonghen, who put it away with ease in the 78th minute.

Needing to win and for the result in the other match to go their way, Korea pressed throughout the first half and came close to a breakthrough when Ki Sung-yueng had a rasping long-range shot brilliantly saved by keeper Thibaut Courtois.

At the other end, Dries Mertens missed a golden chance for Belgium eight metres from goal when he shot well over.