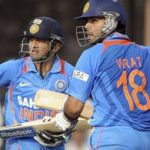 Gautam Gambhir scored an explosive 126 not out as India beat New Zealand by nine wickets in the third ODI in Baroda.
The stand-in India captain blazed to his second consecutive hundred in just 88 balls and added 114 runs for the unbroken second wicket stand with Virat Kohli (63 not out off 70 balls) after India’s bowlers had restricted the visitors to 224 for nine in 50 overs.

Zaheer Khan, Yusuf Pathan and Ravi Ashwin claimed two wickets apiece and barring James Franklin (72no) no other Kiwi batsmen was able to break the shackles.

Martin Guptill (12) could not repeat the heroics of Jaipur and was run out off a direct throw from Gambhir.

Local boy Munaf Patel trapped Kane Williamson (21 off 50 balls) lbw in his second over and at the end of 16th over the visitors were tottering on 50 for four.

Scott Styris scored 22 off 35 balls but was very scratchy throughout his innings. The right-hander finally departed to a brilliant catch at leg slip by Yuvraj Singh off Ashwin.

With wickets falling at regular intervals, and Munaf in the middle of a miserly spell (8-1-15-1), Franklin tried to drop anchor and helped the Kiwis to reach 89 for five after 26 overs

With the team tottering at 106 for seven, Franklin, with the support of Nathan McCullum, put together a crucial partnership for the eighth wicket.

Franklin brought up his maiden fifty by sweeping Ashwin, but Nathan, who played brilliantly for his 53-ball 43, fell to Ashwin a few overs later.

Together Franklin and Ashwin added 94 runs off 117 balls and ensured that the Kiwis lasted the stipulated 50 overs.

Franklin remained unbeaten on 72, which was studded with five boundaries and a six, and Kyle Mills scored a quickfire 15.

India openers Gambhir and Murali Vijay started confidently and scored at a rate which was well above the required rate brought up 100-run partnership inside 15 overs.

As expected Gambhir played the aggressor while Vijay was happy to bide his time, but was more confident facing spinners than he was in Jaipur.

The stand-in captain hit a hat-trick of boundaries off Andy McCay en route to his 22nd half-century which came in just 30 balls and included nine hits to the fence.

As the duo were making light of the job at hand, Vijay unnecessarily ran himself out trying to steal a non-existent single.

That brought Kohli to the crease and the heroes of the comprehensive six-wicket victory in second one-day international in Jaipur continued to torment the Kiwi bowlers.

Gambhir cruised to his ninth century in only 88 balls after stealing a single off a fumble from Vettori as wickets eluded the Kiwi bowlers.

Gambhir and Kohli executed a flurry of big shots in a bid to seal an early victory and the duo added 114 runs in 125 balls to take India home with 10.3 overs remaining.

Gambhir, who scored an unbeaten 138 in Jaipur, smashed 16 boundaries in his unbeaten 117-ball innings while Kohli, who hit his 10th half-century, had six fours and two sixes against his name in his 70-ball innings.