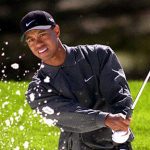 Washington: In a year when the world watched Tiger Woods lose his marriage, his top ranking, his iconic image and every tournament he played, golf thrived with new stars and looked to a less Woods-centric future.

The fall of Woods dominated the year in golf, from a February apology that commanded global attention to the end of his five-month hiatus at the Masters in April with a tension-packed tee shot on the way to a fourth-place finish.

The 14-time major champion slogged through a winless 2010 season. His sex scandal made him a joke punchline and led to a divorce in August from wife Elin Nordegren. His world number one ranking was taken by England’s Lee Westwood.

“It’s an interesting time for golf,” Westwood said. “It’s a lot more interesting when it’s more volatile with who can become world number one. For the neutral who doesn’t normally watch golf it has captured their imagination.”

As the year ended, Woods had reasons for optimism. His game showed flashes of past glory, losing in a playoff at his World Challenge charity event with shotmaking that reminded people why they watched him in the first place.

“Everybody hopes that he will come back to the way he was before,” Germany’s Martin Kaymer said. “I think, in everybody’s head, he is still the best player in the world.”

In a late November charm offensive timed to the one-year anniversary of his car crash that touched off the scandal, once-reclusive Woods opened himself as much as he ever had to the public that once adored him unquestioningly.

“I’m grateful that I did examine my life because it has made me more grounded than I’ve ever been,” Woods said. “I’m not the same man I was a year ago and that’s a good thing.”

As second-ranked Woods looked to his 35th birthday on December 30, he was defending champion of nothing and four major titles shy of matching the all-time record of 18 won by Jack Nicklaus in the defining quest of his career.

With Woods reduced to the level of just another golfer on the course, the sport still showed the drama and skill that attracted fans long before Woods arrived.

Phil Mickelson won the Masters in dramatic fashion, taking his fourth major title and third Masters green jacket. At the 13th hole on Sunday, Mickelson fired a 6-iron shot between two trees and landed it three feet from the hole.

The first time major champions all showed the shape of things to come. But it was not only the major winners who made their name.

Northern Ireland’s Rory McIlroy matched the low round in a major with a 63 at St. Andrews, where swirling winds blew away his chances for a victory.

Westwood ended the five-year reign of Woods atop the rankings despite still failing to capture his first major crown and help Europe win the Ryder Cup.

“It’s a strong time for Europe,” Westwood said. “I don’t know the reason. It goes in cycles like that. We have a lot of good players at the moment.”

Europe defeated the United States 14 1/2-13 1/2 in Wales to reclaim the Ryder Cup, with Westwood, Kaymer and McDowell in starring roles. McDowell beat Hunter Mahan 3 and 1 to clinch the trophy.

“I’ve never felt that nervous on a golf course in my life before,” McDowell said.