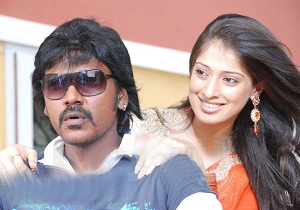 This actress mostly tops the headlines for her alleged affairs with celebrities, from cricketers to actors. But she always denies the affairs as done by all the celebrities by saying that they are mere gossips.

She is none other than Belgaum beauty Lakshmi Rai who was seen in recently released Kanchana. Buzz in the tinsel is that the actress is having an affair with choreographer-actor-director Raghavendra Lawrence. Word is that just because of their close relation the actress shared the screen space with Lawrence.

On answering the latest pop-up, the actress said “I am exhausted of answering these baseless rumours. Is there anything wrong in working with the particular actor for many times? In fact Lawrence is my good friend and great co-star. There is nothing personal between us. Even I am not the first choice of Lawrence for Kanchana as he was in plans of featuring Anushka in the female lead initially. I signed the film only after Anushka was unable to allot dates”