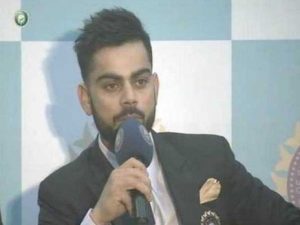 Fast bowler Varun Aaron was impressive with three-wicket haul as India started their tour of Australia on an impressive note on Monday. Playing their first tour match against Cricket Australia XI in Adelaide, Aaron (3/72), Bhuvneshwar Kumar (2/32) and Mohammed Shami (2/52) restricted the home team to 219 all out in 71.5 overs at Adelaide’s Gliderol Stadium. The Australians won the toss. (Michael Clarke named in Australia’s 12-man squad for first Test)

At close of play, India were 55 for 1 in 16 overs. Shikhar Dhawan was out for 10 after a brisk start but Murali Vijay (32 not out) and Cheteshwar Pujara (13 not out) ensured the Indians were without further trouble in their two-day match where 11 can bat and as many can field.

Spinners Karn Sharma and Ravichandran Ashwin were also among wickets with 2/30 and 1/22, respectively. On Day 2 on Tuesday, India will aim to bat as much as possible to adjust to conditions before the first Test in Brisbane from December 4. The Indians have not played Test cricket in a long time, their last series being a 5-match ODI contest with Sri Lanka at home. Virat Kohli is leading India in absence of injured captain Mahendra Singh Dhoni.