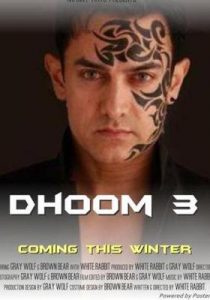 After writing two instalments of successful action film “Dhoom” series, Vijay Krishna Acharya aka Victor is delighted to take on the responsibility of directing “Dhoom 3”. “I’m very happy as I am directing ‘Dhoom 3’,” said Victor, adding that he was sure from the very beginning he would be directing the movie. The first two instalments of the film were directed by Sanjay Gadhvi. “I like to direct what I write. When I started writing (part three), I knew that I would be directing it. I became a writer by default, I always planned to direct a film. I am at pre-production stage and am happy wherever I am at present,” Victor said. The first instalment of “Dhoom”, which starred John Abraham, Abhishek Bachchan, Rimi Sen, Eesha Deol and Uday Chopra, was a super duper successful actioner of 2004. Two years later came “Dhoom 2” and apart from Aishwarya Rai-Hrthik Roshan pairing, the film’s action scenes and performances by the entire cast that included Abhishek, Bipasha Basu and Uday were appreciated by one and all. Aamir Khan has been roped in to play the pivotal role in “Dhoom 3”. The female lead for the film is yet to be decided. Victor made his directorial debut with “Tashan” (2008), which turned out to be a dud. So does he find himself burdened with the expectations of “Dhoom” fans? “As a filmmaker what you can hope to do is doing what drives you. I will make a film which I would believe I should do and I can. Commerce is in no one’s hand and that should not be the only reason to make a film ever,” said Victor who is sentimentally attached to his directorial debut. “It’s the first film that I had directed; so it would always be close to my heart. Success and failure are a part of filmmaking. Of course, when you do and find no resonance, you should go back and find it,” said Victor, who has also scripted “Pyaar Ke Side Effects” and penned the dialogues for Mani Ratnam’s “Guru” and “Raavan”. “I did ‘Raavan’ in between. With Mani sir, I was assistant director. I am a writer and I write in Hindi, and it is not the first language of Mani sir. So I like being on the set with him. I love working with him because he is a great guy and you end learning many things.”