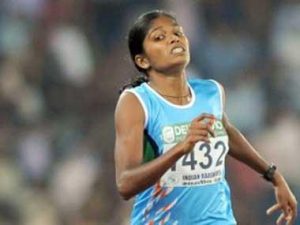 India’s Tintu Luka produced her season’s best timing but still finished sixth in the second heat of the women’s 800m semifinals to crash out of the London Olympics on Thursday.

The top two in each of the three heats and the two fastest losers advance to the finals.

Luka was 0.52 seconds off her personal best but it was a vast improvement than her show in the first round heats on wednesday. She had qualified for the women’s semifinals after finishing third in heat two, clocking 2:01.75s.

Luka, who started at lane number two, was running third for a brief time in the first lap but soon fall back at fourth and eventually finished ahead of Romanian Lavric Elena Mirela (2:00.46) and Greneda Bernard-Thomas Neisha (2:00.68).

The Kerala girl, coached by legendary P T Usha, had to slice a few seconds from today’s effort to salvage any hope of qualifying for the final round. She has a personal best of 1:59.17s.