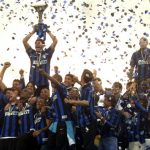 Argentine striker Diego Milito made one goal and scored another on his return from a five-week absence, as Rafael Benitez’s under-performing side set up a meeting with surprise package Tout Puissant Mazembe in Saturday’s final.

Inter, who last season won an unprecedented treble of Italian league, cup and Champions League titles, were 10 points behind Serie A leaders AC Milan when they left for Abu Dhabi, but they will now be expected to end the year with another piece of major silverware.

“It was a very hard win and it was difficult to control the game as Seongnam players were running a lot and they knew exactly what to do,” said Benitez.

“It wasn’t easy to start as well as we did as we lost (Wesley) Sneijder so quickly.

“The second goal made the difference for us and then towards the end we controlled the game.”

He added: “I’m happy with my players as they did what we wanted of them. Seongnam are well organised and they have a lot of qualities but they had some difficulties tonight.”

Seongnam Ilhwa coach Shin Tae Yong said: “I would like to congratulate Inter as they played really well today. The score might be 3-0 but our players gave their best until the end of the game.

“Our team did a lot of effective work but in the first half we conceded two goals and they had a slight advantage.

“If we compare the two teams, Inter’s players were physically stronger.

“Also, their individual skills were better than us and that was one of the reasons why we lost tonight. Inter were good and they scored three goals but we were not bad ourselves and gave a good performance tonight.”

Inter welcomed Julio Cesar, Cristian Chivu and Milito back from injury, but Sneijder had to go off after appearing to injure his left hamstring inside the first 30 seconds.

Sneijder had barely disappeared down the tunnel when veteran Serbian midfielder Dejan Stankovic put Inter ahead.

After Milito was crowded out on the edge of the Seongnam box, Stankovic displayed impressive balance and a cool head to steady himself and then roll the ball into the bottom-right corner with his left foot.

Seongnam were unable to react to the setback and in the 32nd minute Inter doubled their lead in stylish fashion.

Captain Javier Zanetti flicked the ball to Milito and drove into the box before receiving Milito’s expertly directed back-heel and guiding the ball beyond Seongnam goalkeeper Jung Sung-Ryong.

Julio Cesar had to be alert to save a Dzenan Radoncic header as Seongnam sought a route back into the game, but the Brazilian goalkeeper was then beaten by a header from Chu Byung-Kuk as he advanced to claim a free-kick, only for the ball to go wide of the post.

Jo Jae-Chol gave Inter a mild scare with a snapshot from distance that brushed the roof of the net, but the Italian champions were largely able to keep their opponents at arm’s length.

Eto’o was denied by Jung with 17 minutes remaining, but Milito was on hand to stab the rebound into the net and seal Inter’s place in the final.

Seongnam had a superb opportunity to respond shortly afterwards, but when Julio Cesar parried Asian player of the year Sasa Ognenovski’s free-kick straight to Radoncic, the Montenegrin side-footed the ball wide from close range.

Earlier, Mexican side Pachuca hit back from 2-0 down to defeat local representatives Al-Wahda on penalties in the fifth place play-off.

Pachuca trailed by two goals with less than 10 minutes to play but Dario Cvitanich claimed a late brace to tie the scores and after a goalless period of extra time, the Mexicans prevailed 4-2 on penalties.