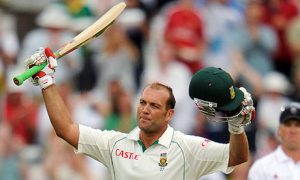 Johannesburg: South Africa coach Russell Domingo has said that Jacques Kallis is likely to bat at the number three position during the upcoming ODI series in Sri Lanka.

38-year-old Kallis is back in South Africa`s ODI plans and has an eye on next year`s Cricket World Cup in Australia and New Zealand .

According to Sport24, Domingo said that Kallis would probably slot back into the number three position for the three-match ODI series that starts in Colombo on Sunday.

Domingo said that they would try to be as consistent as possible with South Africa`s batting order as they build-up to next year`s showpiece event.