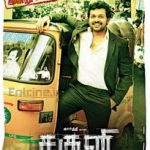 Karthi’s upcoming film Saguni has just kick started. The film is being directed by Shankar Dayal and produced by Dream Warrior Pictures. The lead pair for Karthi has not been finalized yet and it is expected that they could rope in someone from Bollywood.
The shooting of Saguni just began and is progressing in and around Chennai. Sources say that Saguni will be a masala film that will have all the elements to suit Karthi’s fans.

There are plans to have this film released on Diwali day. The entire team is in fact working hard to achieve this goal.