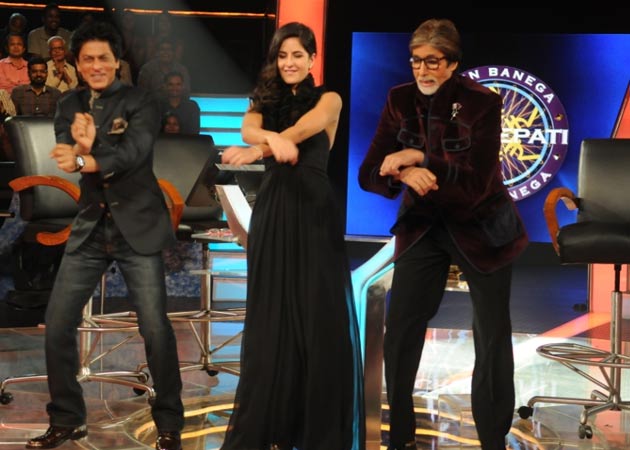 The Gangnam fever has now spread to Bollywood, with megastar Amitabh Bachchan, Shah Rukh Khan and Katrina Kaif copying the typical style for a fun-filled moment on the sets of Kaun Banega Crorepati 6 (KBC).

Shah Rukh and Katrina came as special guests for an upcoming episode of KBC to promote their much-awaited movie Jab Tak Hai Jaan. They entertained the audience with their wit and charm and capped it with the impromptu dance.

The Gangnam style entails unique and bizarre dance steps, made popular through Gangnam Style, a song by South Korean rapper Psy. The style has become a rage, and there’s no doubt the Indian actors are well-tuned in to the latest.

Big B was unaware of the moves, but Shah Rukh agreed to show him the Gagnam style only if the veteran actor and Katrina would join in. Once the trio stood up, they began to groove.

Amitabh Bachchan shared the pictures of their moves on his Facebook page, and said he had a great time shooting with Shah Rukh Khan and Katrina. All three of them looked elegant in black.

“Fun filled episode with Shah Rukh and Katrina… laughter, leg pulling, dancing, Gangnam, and the audience going wild… bliss!,” Big B tweeted after shooting for the episode, which will go on air on Sony November 4.

Shah Rukh’s association with KBC goes back to 2007 when he hosted its third season. But Amitabh took over in the very next season.