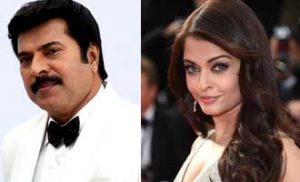 Mani Ratnam’s previous Hit movie ‘OK Kanmani’ is yet to die down, news of Mani Ratnam’s next is doing the rounds. The buzz is that Mammootty will essay the lead hero in the movie. This is happening close on the heels of Mammootty’s son Dulquer becoming Mani’s leading man in the previous venture.

It is said that Aishwaria Rai Bachchan has been roped in to essay the female lead in the movie. The Mani Ratnam – Mammootty – Aishwaria team had previously worked together and their joining of hands has sent film buffs in a tizzy. Mani Ratnam has always expressed his admiration for Mammootty and the upcoming movie will be testament to their unique relationship.