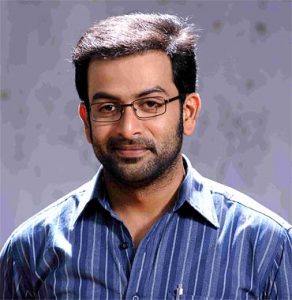 After Prithviraj’s mass masala films bombing at the box-office, the actor is doing a film titled Manikyakkallu in which he has no swanky cars, designer suits and sunglasses!

The film is directed by Sreenivasan’s brother-in-law Katha Parayumbol fame, Mohan and is said to be a family entertainer. The story is about a young teacher who hopes to turn around a failing school.  It is about ordinary people in a sleepy village called Nallepally near Chittur in Palakkad.

The story happens in a government school that had a glorious past but is now on the verge of being shut down as there are less than 50 students enrolled there. The teachers have lost all hope about king a difference to the situation and are busy with their personal activities. Into this situation comes a young teacher who makes a difference.

Nedumudi Venu, Samvritha Sunil Jagadeesh, Anil Murali, Kottayam Nazeer, Anoop Chandran, K.P.A.C. Lalitha and Muthumani are also part of the cast. Manikyakkallu is being produced under the banner of Gouri Meenakshi Movies. Lyrics by Anil Panachooran have been composed by M. Jayachandran.