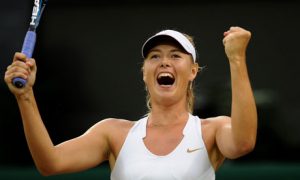 THE shock losses suffered by top two seeds Serena Williams and Li Na have left Maria Sharapova with a smooth passage and the Russian is primed to win her second Wimbledon title, 10 years after winning her first as a 17-year-old.

Sharapova has dropped just seven games in her three matches thus far and the imperious Russian will be confident of winning her sixth grand slam in the absence of her nemesis Williams. The 27-year-old is on the wrong end of a 16-2 head-to-head record against the American with her only two triumphs coming in 2004, the first of which saw her crowned Wimbledon champion.

Williams crashed out 6-1 3-6, 4-6 against France’s Alize Cornet in the third round on Saturday, her earliest exit at Wimbledon since losing in the same round in 2005.

Their defeats have opened the door for a host of women, but the top of that list is Sharapova.

Players have long talked about the difficulty of adapting to the grasscourts of Wimbledon so soon after a long claycourt season and nobody has backed up winning the French Open with Wimbledon triumph since Williams in 2002.

Sharapova’s form, however, suggests she can match that achievement and win her sixth grand slam in the process.

“Well, this is only my second time trying to do that. Of course, the transition, it’s no secret, it’s very difficult,” she said after reeling off 11 consecutive games to beat Alison Riske 6-3, 6-0 on Saturday.

“But I’m quite happy with the way I’ve gone about things so far,” added Sharapova who plays German ninth seed Angelique Kerber in the round of 16.

Higher seeds remain but Sharapova’s biggest challenge is likely to come in the shape of rising star Eugenie Bouchard, a semifinalist in the last two grand slams at the Australian and French Open.

The aggressive 20-year-old Canadian faces Williams’ conqueror Cornet in the next round with a potential quarterfinal against Sharapova the prize.

“I wouldn’t consider myself deep into Wimbledon at this stage,” Bouchard said after beating German Andrea Petkovic.