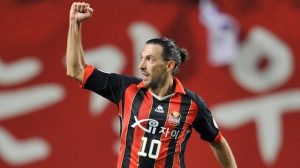 “I`m glad to join such a big club like Beijing Guo`an,” Damjanovic told the Guo`an.

“I know most of Guo`an players and some of them are good friends with me.”
Beijing Guo`an announced Damjanovic`s jersey number is going to be 27.

Meanwhile, Jiangsu Sainty also thanked the player for his service to the club where he stayed for half a year after moving from K League giant FC Seoul.

Damjanovic, 33, led the top-flight K League Classic in goals for the past three seasons, and is the first player ever to win three straight scoring titles in South Korea.