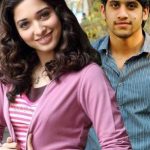 Milk white beauty, Tamannah who is ruling the Kollywood industry in top position has now been roped in for a Telugu film opposite young hero, Naga Chaitanya. Sukumar is the director of the film and Allu Aravind is producing it under his banner, Geetha Arts. Devi Sri Prasad will render the tunes for the film. Currently the film is shooting at brisk pace in Hyderabad. The schedule was started on September 6th and continues up to September 20th in which a few important scenes and a song on the lead pair would shoot.

On the other hand, Tamannah is also currently acting opposite Allu Arjun in ‘Badrinath’ movie. VV Vinayak is wielding the megaphone for the project. MM Keeravani is composing the music. This mega budget film is also being produced by Allu Aravind under Geetha Arts banner. At the same time hero Naga Chaitanya is also busy in wrapping up the shooting of his latest upcoming film which is being directed by Ajay Bhuyan movie and produced by D Siva Prasad Reddy on the banner of Kamakshi Kala Movies. Kajal Agarwal is the love interest of Naga Chaitanya.