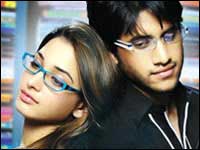 Naga Chaitanya-Tamannaah’s forthcoming Telugu film, being directed by Sukumar and produced by Bunny Vasu under the banner of Geetha Arts, has entered its last leg of production.

This untitled film has completed 90% of its shooting and is currently wrapping up the final schedule in Hyderabad. Devi Sri Prasad is scoring the music. Cinematography is by Prasad and screenplay by Hari Prasad. After a gap of one year, this is the first straight Telugu film for Tamannaah.