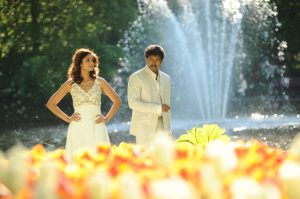 The Kollywood grapevine is abuzz that Shankar’s Vijay multi-starrer Nanban audio will be launched at Harris Jayaraj’s `Harris On The Edge` concert in Coimbatore on December 24.

There is no official confirmation from the producers of the film Gemini Film Circuit (GFC).

Earlier it was rumoured that Nanban audio will be launched at a function in Chennai on December 14.

Harris Jayaraj the music director of the film has completed all work and handed over the dart to Gemini Audio along with audio cover designed by Shankar.

GFC will take a call on the venue and other details about the audio launch in a day or two. The chances of audio being launched in Coimbatore are bright as Harris will be there two days before his concert happens.

The question is whether Shankar, Vijay and Nanban team will launch it at Harris concert or not or go for a separate function.