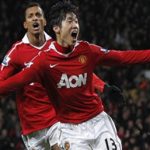 United, who also have a game in hand over all their title rivals, could even afford the luxury of a missed penalty 17 minutes from time when Wayne Rooney fired wildly over the bar after Gael Clichy was adjudged to have handled inside his own area.

It was hardly a vintage performance but United, who visit reigning champions Chelsea on Sunday, were full value for a fifth successive home win which meant they also retained their unbeaten Premier League record this season.

United manager Sir Alex Ferguson was delighted by Park’s display, telling Sky Sports: “His record against Arsenal is very good and he’s been in fantastic form, the lad.

Ferguson, who praised his “magnificent” back four, said of United’s overall position: “I think we are starting to get there and our form is improving.”

Meanwhile Arsenal manager Arsene Wenger tried to downplay the defeat, with the Frenchman saying: “I don’t think we failed to deliver; we lost a game and that can happen here.”

This was United’s first league game in 16 days. Ferguson’s team have been eliminated from the League Cup, held by Valencia in the Champions League and knocked off the Premier League summit since they stuck seven past Blackburn last month.

Yet they went into the first of two titanic back-to-back games knowing victory would send them back to the top ahead of the trip to Chelsea.

There was little to choose between the two teams in a predictably tightly-fought first half in which chances were at a premium.

And Szczesny, half the age of United’s 40-year-old veteran Edwin van der Sar, had a relatively trouble free first-half.

Rooney did sting Szczesny’s finger-tips from 22-yards in the ninth minute, but it was one of few saves the youngster was called to make in a tense and edgy game.

Arsenal, who started with Cesc Fabregas on the substitutes bench, responded through Marouane Chamakh but the striker’s header failed to trouble van der Sar.

As the game wore on, it became apparent that one moment of quality would secure the points.

And just as Arsenal thought they had done enough to go in at the interval on level terms, United broke the deadlock in the 41st minute through Park.

Despite being one of the smallest players on the pitch, the midfielder was allowed to leap above the visitors’ defence and direct the ball past Szczesny after twisting to get on the end of Nani’s deflected cross.

Then Nani fired wastefully over the bar after slack defending by Clichy. With the game slipping away, Wenger sent on Fabregas and Robin van Persie. But the double substitution failed to rescue Arsenal