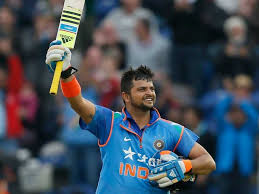 In the firing line after their humiliating loss against England in the Test series and then for some non-cricketing reasons, MS Dhoni’s side were in desperate need of a spark to ignite their hopes of winning a game in the one-day series. The washout in Bristol prolonged their wait and the way things started for India in Cardiff on Wednesday, Dhoni would have dreaded for the worst.

Asked to bat on a lively pitch at the SWALEC stadium with two wickets down for 19 and Virat Kohli back in the pavilion without scoring, India’s hopes looked slim. Rohit Sharma and Ajinkya Rahane managed to give India some chance with a 91-run stand but Rahane’s laziness cost him dear and in walked Suresh Raina at No. 5 with India’s scoreboard reading 110 for 3. England were very much in the game until that point of time and strokemaking looked difficult on a chilly day.

Raina started with caution early on and stepped the tempo whenever he sensed a chance. The ease with which he swept James Tredwell and cut Chris Jordan came as a big relief for Indian fans who have had little to cheer about on the current tour. Raina’s footwork was a picture of positivity and the two sixes he hit in the 38th over bowled by Chris Woakes was a show of his confidence. Twenty runs off that over dented Woakes’ bowling figures. If Raina’s 50 off 49 balls was display of his resolve, his next fifty exposed the brittleness of England’s bowling. Probably, for the first time on the tour, England bowlers were under attack and it took no time for them to wilt.

The left-hander took just 24 balls after his fifty to race to his fourth one-day international hundred, his first overseas. It was a chanceless innings under pressure. The 28-year-old departed for an even 100 but not before he set India on course for a big total and, more importantly, riding the team out of the gloom that had engulfed it since the time they had arrived in England this summer. It took just 74 balls to do that. For those interested in stats, his 106-minute stay at the crease was laced with 12 fours and three sixes.

His effort was soon applauded by former India captain Sourav Ganguly, who said: “It was an absolute blinder. I haven’t seen many play such a knock in English conditions.”

India’s man of the moment then took a wicket in the three overs that he was asked to bowl as England succumbed to a 133-run loss while chasing a Duckworth-Lewis revised target of 295 in 47 overs.