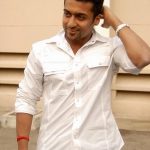 Superstar Surya’s much waited movie 7aam Arivu will have some of the best technicians working on the project.
Produced by Udhayanidhi Stalin 7aam Arivu features Surya and Shruti Haasan in the lead roles. The latest ne is that producer Udhayanidhi Stalin has recently roped in Stan Winston Studio for the special visual effects in the film, the same technicians who worked for the special effects of Superstar Rajnikanth‘s Enthiran.

7aam Arivu is a medical thriller being directed by A.R. Murugadoss, who has earlier given huge hit Ghajini with Surya.