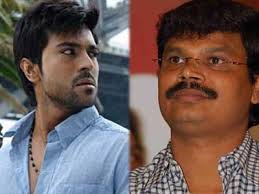 Ram Charan has given nod to director Boyapati Srinu for a new film. Boyapati Srinu who has delivered a super hit Legend will soon wield the megaphone for a love story featuring Ram Charan in the lead.

KL Narayana will produce the movie under the banner of Durga Arts. The script work is under progress and the film will take four months to commence the shooting schedules. More details of the movie are to be announced by the makers.

Ram Charan meanwhile will wrap up his shooting schedules of Govindudu Andari Vaadele film in Krishnavamsi direction touted to be a family entertainer.