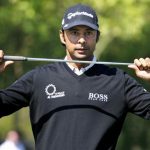 New Delhi: Ace India golfer Jyoti Randhawa pulled out after suffering a neck injury on the opening day of the LG Masters, which saw Sanjay Kumar storm into the lead after posting a brilliant bogey-free six-under 66 here on Thursday.

Eight-time Asian Tour winner Randhawa was playing a shot on the 11th hole, his second hole of the day, when he started feeling uncomfortable on his neck and had to withdraw from the season-ending PGTI event.

However, it was a brilliant day for Sanjay, who took the lead on a windy day that saw a total of 14-under par scores.

Sanjay’s putting was rock-solid as he sank three seven- feet birdie putts on the first, fourth and eighth.

A great lob-wedge shot that landed two feet from the hole, set up a birdie for Sanjay on the 14th.

Sanjay, currently placed 23rd on the Rolex Rankings, thanks to four top-10s this year, knocked down a birdie putt from 12 feet on the 17th and followed that up with another birdie conversion from 14 feet on the 18th.

“My putting was solid especially on the back nine. I also hit it well and missed regulations on only two holes. The conditions were not very easy as the wind was switching directions today. In that sense a round of six under is a great result for me,” Sanjay said.

“I closed it out well with a birdie putt from the edge of the green on the 17th and a tough 14 feet birdie conversion on the 18th. These two birdies towards the end have given me some momentum going into the next round,” he added.

Ashok Kumar came up with a bogey-free 67 at his home course to be placed tied second.

The Rolex Rankings leader was in tremendous form with the putter.

He sank birdie putts from 35 feet and 25 feet on the sixth and 11th respectively.

Shankar Das of Kolkata joined Ashok in tied second place as he made six birdies against a bogey in his round of 67.

The highlights of Shankar’s opening round effort were two magnificent chip shots that led to birdies on the eighth and 14th. He also secured a birdie from 15 feet on the 17th.

The Delhi Golf Club duo of Manav Jaini and Vivek Bhandari were lying at tied fourth at four-under 68.

Gaganjeet Bhullar was in tied 10th with a first round score of two-under 70.