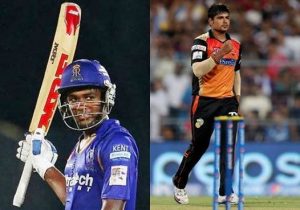 The Indian team for the 5 ODIs and a lone T20I against England has been announced. Yuvraj Singh has been dropped from the T20I squad while Sanju Samson, Karn Sharma and Dhawal Kulkarni have received a call-up to the national squad after impressive performances with the India ‘A’ team in Australia.

Samson scored two fifties and an unbeaten 49 recently in the quadrangular series Down Under. Karn Sharma starred with an all-round performance against South Africa ‘A’ but has been incredibly consistent in the Indian Premier League (IPL) for Sunrisers Hyderabad (SRH).

“Only Amit Mishra had been ruled out of selection since he is undergoing treatment and rehab following a back injury. Considering the World Cup, the management as well as the selectors have put more emphasis on selecting some of the youngsters like Sanju Samson, Mohit Sharma, Stuart Binny and Karn Sharma,” Sanjay Patel, BCCI secretary, was quoted as saying.