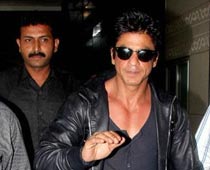 Bollywood superstar Shahrukh Khan formally launched ‘The Raviz’, a five-star hotel property with seven star facilities standing on the banks of the Ashtamudi lake in suburban Kollam, yesterday. The chief minister, Oommen Chandy,  inaugurated the function. Shahrukh who was excited with the beauty of Kerala also took time to have a chat with the press. “I am coming after a long time. It is fantastic to be here. I was here (in Kerala) for “Dil Se”,” he said.Shahrukh maintained that the cause behind the agitation launched by Anna Hazare, that is to check corruption with Gandhian manners, is so fantastic that it is beyond his capacity to comment. Corruption in the country has become so huge that we all support anti-corruption movements. Now that the movement is on the streets we should ensure that it does not die.’added the most popular star of Bollywood

Shahrukh was also of the view that the film industry of the country including Bollywood should give more emphasis to create  entertainment than to engage in any sort of activism.’Ultimately entertainment should be looked upon as enrichment of the mind’. he added. Citing Kerala as the best film-making State in this country Shahrukh also remembered the fine tips on good acting that  Mollywood actor slike Mammooty and Mohanlal had given him, from which he gained much. Khan, along with Malayalam superstar Mohanlal, also launched the logo for “Kollam Feast”, a tourism promotion campaign, at the Asramam Maidan at Kollam, about 70 km from Thiruvanathapuram.