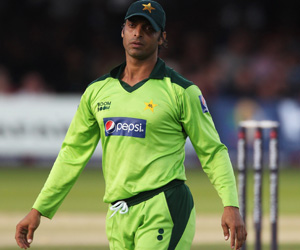 DHAKA: Pakistan’s mercurial fast bowler Shoaib Akhtar was among three team-mates who were taken for random dope testing ahead of the World Cup, an official confirmed Thursday.

Akhtar wicket-keeper Kamran Akmal and seamer Umar Gul were tested after a practice session on Wednesday by the International Cricket Council’s drug inspectors, team manager Intikhab Alam said. “These are normal procedures and players from every team will be tested,” Alam said.

Akhtar, recalled for the World Cup after being out of action for a major part of the last three years due to injuries, tested positive for a banned drug nandrolone in 2006.

There was further trouble for Akhtar after he and fellow paceman Wahab Riaz were fined 3,000 Bangladeshi taka ($42) each for returning late from a private dinner on Wednesday night. “We want players to follow team rules,” said Alam.

“The two have been warned not to keep late nights in future.”

Akhtar did not bowl against Bangladesh Tuesday with coach Waqar Younis admitting the fast bowler had yet to regain full fitness. “Shoaib is not in touch at the moment,” the fast bowling great said. “It is important he gets into full throttle before we get him into the side.”