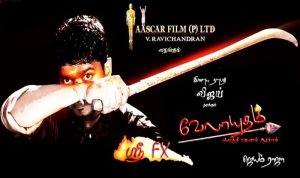 The latest names we hear in Kollywood audio market are Sony BMG, Venus and Think Music. All are playing a major role in the market and are bagging the audio rights of big projects. Out of all the above it’s Sony Music who is high on sky by locking the rights of hit albums.

Latest album which is bagged by them is Vijay’s Velayudham, one of the most awaited films of the year. Sony Music South has snapped the audio rights for a good amount. The film features Vijay in the role of a villager while Hansika Motwani and Genelia shared the screen space with him. Vijay is one man army in the film and his character will surely make a mark in his career.

Music is by Vijay Anthony and he has given peppy and outstanding numbers which will make all his fans dance in the theaters. Vijay and Genelia will be flying to Europe for a song sequence very soon.