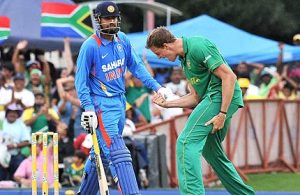 South Africa survived a real scare from Yusuf Pathan to finally beat India 3-2 in the five-match One-Day International series at the SuperSport Park, Centurion on Sunday.

South Africa posted 250 for nine in 46 overs as rains interrupted play. India had to chase 268 in 46 overs thanks to the Duckworth and Lewis Method in 46 overs.

India looked to have lost its way at 119 for eight and were in for a massive defeat. But Yusuf Pathan smacked eight sixes and eight boundaries to revive India’s innings.

Yusuf added 100 runs for the ninth wicket with Zaheer Khan, as he scored a 68-ball hundred. In the end Yusuf fell with India needing 49 more runs and it was not long before South Africa completed the last rites.

Morne Morkel ended with 4 for 52, Dale Steyn (2-32) and Lonwabo Tsotsobe (2-52) were the other successful bowlers for South Africa.

Earlier, Hashim Amla smote his way to his seventh One-Day International century as South Africa scored 250 for nine in a rain-restricted innings.

Opening batsman Amla made an unbeaten 116 in an innings which was interrupted when South Africa were strongly placed at 226 for three after 42 overs.

The rain caused a delay of more than an hour and the match was reduced to 46 overs a side. South Africa lost six wickets for 24 runs in the remaining four overs of their innings, with a succession of batsmen falling to ill-judged strokes and two run-outs in a chase for quick runs.

With the series locked at two-all, Indian captain Mahendra Singh Dhoni sent South Africa in, hoping to take advantage of expected early morning life in the pitch – and also to have the option of revising his team’s strategy in the event of predicted rain interruptions.

South Africa captain Graeme Smith fell once again to left-arm opening bowler Zaheer Khan – for the 11th time in international cricket – edging a catch to second slip in the third over.

There were only four boundaries as Amla reached fifty off 72 balls, but he added another five fours as he needed just 41 more deliveries to reach the first century by a batsman of either side in the series.

For the second match in a row, Dhoni used eight bowlers, mainly in short spells.

As in the fourth match in Port Elizabeth, left-arm spinner Yuvraj Singh was the most effective of the slow bowlers, taking two for 45 in eight overs – the longest unbroken spell by any of the players. But when Yuvraj conceded nine runs off his eighth over Dhoni immediately took him out of the attack.

Amla and Duminy were starting to dominate the bowling and were picking up the scoring rate going into the closing overs of the innings when the rain started to fall during the first over of the powerplay, halting play before the next over began.

Zaheer Khan and Munaf Patel took advantage of rash South African stroke play as they caused a collapse after the rain delay.