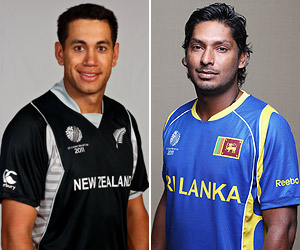 MUMBAI: Both Sri Lanka and New Zealand will look to end their group stage on a high when they clash here at the Wankhede Stadium Friday, and carry the momentum into the quarterfinals of the cricket World Cup.

The two teams, apart from Australia and Pakistan, have already entered the knockout stage from Group A. The only point of interest is where the two finish on the points table.

Both the teams, however, insist that they are not looking at the next stage and are focussing on winning Friday’s match.

The Black Caps have been a revelation in this World Cup as they had a poor run coming into the quadrennial event. After a bad loss against Australia, they have turned it around, winning their last three matches, including a crushing 110-run victory over Pakistan.

New Zealand, though, have been plagued by injuries and will be without their two key bowlers — skipper Daniel Vettori and Kyle Mills. Vettori, who strained his knee ligament in the match against Pakistan, missed the previous game against Canada as well. Mills suffered a quad injury against Canada Sunday.

Fast bowler Daryl Tuffey will join the squad Friday as a cover for Mills while left-arm spinner Luke Woodcock is likely to play.

While stand-in skipper Ross Taylor admitted that the absence of two experienced players will hurt the team but chose to dwell on the brighter aspect of the side, which is their lower batting order.

“The top order has been our key for laying the foundation. Our other strength is the lower order batting and the power hitters we have,” Taylor had said Wednesday.

Sri Lanka, on the other hand, will be playing their last league match at a neutral venue despite being one of the co-hosts. They have brushed aside the issue, saying the wickets and conditions here are similar to that at home.

In fact, skipper Kumar Sangakarra sees it as an advantage, saying the pitches here are more balanced than in Sri Lanka.

think it’s always nice to play at your home in front of your home crowd. It’s the same situation for New Zealand and Sri Lanka for this game. In fact, the wickets in India seem to be more balanced than wickets in Sri Lanka, Sangakarra said Thursday.

The island country have had facile wins over Canada, Kenya and Zimbabwe but lost to Pakistan while rain played spoilsport in their match against Australia.

It is expected to a high scoring game, going by the match between New Zealand and Canada that saw more than 600 runs being scored. However, the wicket is also expected to provide some help to the bowlers.

Going by the statistics, it is Sri Lanka who enter the match as favourites, having lost only two of the nine matches they have played against New Zealand since 2007. Also, they have won all their three last meetings against New Zealand in the World Cup, including the 2007 semifinals at Kingston.