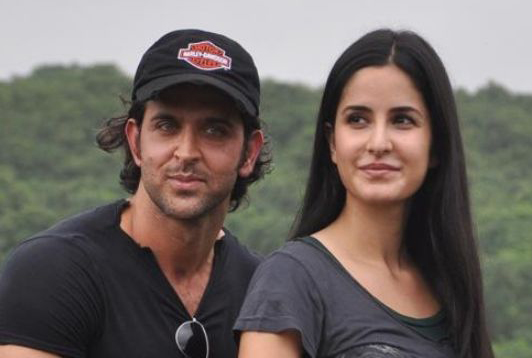 Hrithik Roshan and Katrina Kaif, who were shooting in a boat for ‘Bang Bang’ in Bangkok, were hit by a storm.

They were in the middle of the sea when a four-and-half-foot wave shook the boat they were onboard, a daily reported.
The film in question is being directed by Siddharth Anand, who has also directed ‘Bachna Ae Haseeno’, ‘Salaam Namaste’ and ‘Anjaana Anjaani’.
The two good looking actors shared a sizzling hot chemistry in Zoya Akhtar’s ‘Zindagi Na Milegi Dobara’. They even shared a steamy lip-lock in the film that also starred Abhay Deol, Farhan Akhtar and Kalki Koechlin.

‘Bang Bang’ will see the duo recreate the same magic.

The film will reportedly feature some spectacular stunt sequences. It also promises “intense chemistry” and “edge-of-the-seat excitement”. Hrithik and Katrina will set to scorch the silver screens in “never-seen-before avatars”, according to a statement.

Looking forward to seeing ‘Bang Bang’, a film that has an unusual title.

Here’s wishing the cast and crew of ‘Bang Bang’ all the very best.