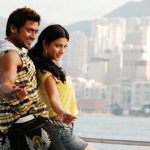 AR Murugadoss -Suriya -Shruti Haasan offering ‘7am Arivu’ is at its post-roduction stage and will see a Diwali release. Grapevine now has it that Sun TV has bagged the satellite rights of this film for a whooping price!
Speaking on this front Udhaynidhi Stalin expressed, “am Arivu will be a Red Giant release for this Diwali, on October 26! The satellite rights have been sold to Sun TV” Further speaking on the progress of his future project ‘OKOK’ with Rajesh, he said that the dubbing work on the laugh-iot will begin tomorrow.

‘7am Arivu’ has Suriya Sivakumar don three roles, that of a monk, a circus artist and a scientist while Shruti Haasan plays a scientist. The film is a sci-fi thriller which will also highlight upon Tamil traditions, say sources.

Not just that, the music of the film is touted to release on September 10 at Singapore and Sun TV will be providing live coverage of the audio launch