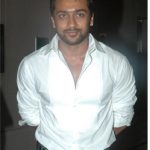 Suriya is getting a chance to be acting in another Bala movie, but this time not as his hero but in a guest role in the upcomming movie Avan Ivan. The movie is still under production and stars Vishal and Arya in the lead role.
It can be recalled that Nandha was the movie that Surya did with Bala and it did wonders for Suriya’s career. Nandha became a huge hit, and earned him critical acclaim from every sector. It is also said that Bala had first approched Surya and his brother Karthi to do the lead roles in Avan Ivan, but they could not work it out due to date problems.

Ivan Avan is said to be a comedy entertainer and this is the first time Bala is doing a movie based on Comedy.

1 thought on “Suriya in cameo role for Bala movie”