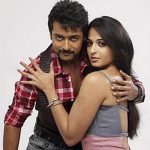 Tamil star Surya’s forthcoming anticipated flick ‘Singam’ which is all set to release on May 28 will be soon dubbed in Telugu. The title for Telugu version has been confirmed as ‘Yamudu’. The film is directed by Hari and glamorous actress Anushka plays the female lead opposite Surya.
The film will be a typical mass masala entertainer with all essential ingredients that attracts both mass and class audiences. Surya plays Dorai Singam, a dirty cop role in the film. Sun Pictures has acquired the release rights of the film.